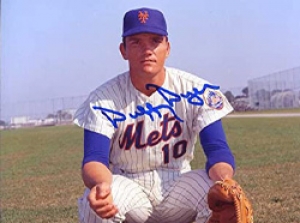 Sometimes there are Mets memories that you have from childhood that just stick with you. It had been gnawing at me that I had a recollection that the Mets were forced to start all three catchers for a game. I asked some Mets buddies and nobody could verify it for me. But then, there is good old Baseball Reference. Dig deep, and thou shall find.

And what exactly made me start thinking about that again?

The Mets have gotten hit by the injury bug. Not only has Jacob deGrom landed on the Injured List, but Carlos Carrasco has yet to make his debut since arriving via a trade, Noah Syndergaard is still rehabbing from Tommy John surgery. So now 3/5 of the starting rotation is down. As for the regulars, J.D. Davis has been on the IL for the second time, and Brandon Nimmo has had to sit also for a second time thus far this season. And now Jeff McNeil is forced out of the lineup. Not to mention that Seth Lugo and Dellin Betances have both been MIA from the Mets bullpen.

Hence, it harkens back to almost 50 years ago. The Mets were primed to get back to the post season in 1972 when they made a blockbuster trade for Rusty Staub. And they thought they got a big-time third baseman when they stole All Star shortstop Jim Fregosi (LOL) from the California Angels. But before the season could even get started, Gil Hodges collapsed and died from a heart attack. It truly became a season to forget.

The Mets still had Seaver, Koosman, and a fabulous rookie in Jon Matlack. But the injuries began to pile up and Mets were dropping like flies. It seemed everyone wandered into the training room and decided to stay because the Mets couldn’t field a team, a real team, on some nights.

On July 11, 1972, with the Mets short on players, Manager Yogi Berra’s starting lineup had second string catcher Duffy Dyer behind the plate with third string catcher Bill Sudakis playing first base against the San Francisco Giants. Jerry Koosman was the starting pitcher facing a lineup that included a first baseman named Willie McCovey, right fielder Bobby Bonds, and some young guy playing third base by the name of Dave Kingman.

The Mets were being two-hit by the Giants Ron Bryant while Kooz was hanging tight against the Giants. When rookie John Milner, playing left field, was the next casualty to go down with an injury during the game, Berra had no choice but to bring banged up first string catcher Jerry Grote into the game.

Berra, needing an outfielder, chose to have Grote put the gear on, and moved Dyer to rightfield. Teddy Martinez, utility infielder, who had been forced into outfield duty, moved from right field to play left.

I loved Yogi but have always questioned his managerial decisions and this was one of them. Dyer had never played another position other than catcher in professional baseball, or even at the collegiate level. Grote, meantime, had shown to be a very capable third baseman over the years. And Sudakis? He had played third base, first base, and outfield while with the Dodgers before coming to the Mets.

So why not have Grote go to third base, move Fregosi who had been playing third to first base, and have Sudakis go to the outfield? No…Berra sent Dyer to right. And in his only chance in his career playing right field, Dyer muffed a ball that cost two unearned runs. The Mets ended up losing the game 6-1.

The very next day, on July 12, the Mets had all three of their catchers in the starting lineup…something that is unheard of. This time, Berra kept Dyer behind the plate but, inexplicably put Sudakis at first base again, and this time put Grote in right field. The results weren’t as bad as the previous day, as Matlack tossed a four-hit shutout for a 4-0 victory. A member of the Giants lineup that day…catcher Fran Healy.

Any Yankees fan will tell you that the Yankees often had two catchers in the game simultaneously as Berra and Elston Howard often switched off between catcher and left field. The difference is that that was done on a regular basis. The Mets situation was created out of necessity, not because two superstar Hall of Famers were occupying two spots in the lineup at the same time.

I have always remembered how decimated the Mets were by so many injuries that season. It was actually painful to watch. Even the arrival of Willie Mays midway through that season couldn’t turn the tide. One by one players fell by the wayside. So much so that the Mets were forced to put all three of their catchers on the field to start a game. Pretty unique. That’s how memories are created.

More in this category: « And Then There Were None New York Mets Super Subs or Super Flubs »
Login to post comments
back to top