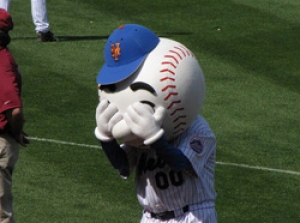 Every true baseball fan is crying inside. No opening day. And it doesn’t look like it will take place anytime soon. Perhaps that will cushion yet another crushing blow for the Mets, with Noah Syndergaard needing Tommy John surgery. You have to wonder if the Mets hierarchy is feeling any sense of embarrassment now, after letting Zack Wheeler sign with a division rival because they believed that they had a healthy Syndergaard for two more years of team control at a great price. I would think they would have to feel somewhat embarrassed by the way things have gone recently. I don't know...but I think it is getting a bit embarrassing.

Anyone who knows me is fully aware that my two favorite baseball teams, my two obsessions really, are the University of Miami Hurricanes and the New York Mets. With no baseball to watch, and my mind wandering, I began to think about how the two are connected, in a number of ways, in ways that all lead to some sort of embarrassment.

Most, if not all Mets fans, may be unaware that Jeff Wilpon is the most bizarre tie between the University of Miami and the Mets. As a favor to friend Fred Wilpon, Coach Ron Fraser gave his son Jeff a chance to play at UM. Almost immediately upon arrival, Jeff alienated himself from the squad. Surprised Mets fans? He was not only disliked by his teammates, but he had such a bad attitude and was so defiant, that the coaches asked him to leave before the 1980 season was even half over. It’s funny that nowhere does it mention on his resume that Jeff even attended UM. The only documentation is the 1980 Hurricanes yearbook and team picture, where Jeff Wilpon is wearing uniform number 16.

As much as things change, they seem to remain the same. As it has been well-publicized that Jeff is disliked so by not only his colleagues, but by his own family members who have publicly stated that they don't trust him.

Ryan Braun was a two-time All-American at UM and was named "National Freshman of the Year" by Baseball America in 2003. The Milwaukee Brewers drafted him in the first round (fifth overall) in the 2005 Major League Draft.

Braun came under scrutiny for a testosterone test that he failed in 2011 and then for his connection in 2012 to the Biogenesis of America clinic that provided performance-enhancing drugs to professional baseball players. It was indicated that it may have been Alex Rodriguez who introduced Braun to Tony Bosch, the program director of Biogenesis. On July 22, 2013, Braun was suspended without pay for the remainder of the 2013 season and playoffs (totaling 65 regular-season games) for violating the league's drug policy. The worst of it was Braun’s arrogance during the ordeal and his constant lying and denials, only to finally come clean, but not until a lot of damage was done to many people along the way.

In 2009 the University of Miami baseball field was rededicated as Alex Rodriguez Park at Mark Light Field after Rodriguez donated $3.9 million to renovate and improve the baseball stadium facilities. A-Rod had spent his youth peering out at the field and signed to play at UM, but instead took the $1.3 million that the Seattle Mariners offered just before his first class was to begin in the fall semester. At the dedication, he acknowledged mistakes he made taking banned substances while playing for the Texas Rangers during the 2001 to 2003 seasons, after constant lies and denials. Five years later, Rodriguez, a 14-time All-Star, would be suspended for the entire 2014 season for violating MLB's performance-enhancing drugs policy, again, after constant lying and denials.

Alex Cora was drafted by the Minnesota Twins in 1993 out of high school but, instead, signed on to play at UM and played on the 1995 and 1996 College World Series teams. He went on to play for 14 years in the major leagues with a number of teams, including the Mets in 2009 and 2010.

Cora’s leadership qualities always shined. He spent a year as bench coach for the Houston Astros for the 2017 season. After the Astros won the 2017 World Series, Cora was considered to be the next manager of the Mets, but when the Mets waffled, Cora quickly took the job with the Red Sox while the Mets made the decision to go with Mickey Callaway.

Cora would later be linked to the sign stealing scandal that has tarnished that 2017 World Series win by the Astros. And suspicions still exist that a similar scheme was going on with the 2018 World Champion Red Sox. He was unceremoniously dismissed by the Red Sox.

Carlos Beltran was one of my favorite players of all-time, even before he played a game for the Mets. His Mets career, while defined by taking a called strike thrown by Adam Wainwright for many fans, was actually good enough to warrant support to be the third player to go into the Hall of Fame wearing a Mets cap. The hiring of Beltran was met with great enthusiasm and he was hailed as the great communicator. The problem is that he failed to communicate one thing – that he, too, along with Cora, played a huge role in the Astros sign-stealing scam.

Beltran would never manage a single game and was dismissed the way he was by that Wainwright pitch, forced to just slink away.

Back to Jeff Wilpon and Alex Rodriguez

Every fan, near and far, celebrated the news that the Mets would be sold to billionaire and minority Mets owner/shareholder Steve Cohen. Unbeknownst to Mr. Cohen, Good old Jeff put some quantifiers into the sales contract, leaving him in control for the next five years and basically giving him a permanent job. Who in their right mind would buy ANYTHING from someone, but allow the seller to remain in charge for five years? That’s like buying a house and allowing the seller to live in the master bedroom with you for five years while you live in the guest room. I don’t know of any business person who in their right mind would do that. So after Jeff pulled that crap, Mr. Cohen pulled out and then the Wilpons tried to make it appear that it was Cohen who was being unreasonable.

The rumors had it that A-Rod and his side-kick J-Lo (ok, so HE is J-Lo's sidekick) were putting together a group to purchase the Mets, much like his pal Derek Jeter did to purchase the Miami Marlins. Wouldn't THAT be fun?

Unfortunately, ultimate Mets fan Jerry Seinfeld, who can definitely afford it, has no interest in participating in a purchase. He said there is a big difference between being a fan and an owner, and he doesn’t want to go there. The late George Steinbrenner didn’t think that way. But perhaps that is why the Yankees are the organization THEY are, and the Mets are the organization THEY are...just embarrassing.

More in this category: The Winds of Change are Swirling »
Login to post comments
back to top