I have seen way too often that the rules do not apply to all. And that is especially true in the sports world. If the person has enough talent, then all will be forgiven and, quite often, forgotten. If a player can bring something to the table...bring enough talent...then no matter how bad they are - legally, morally, or any other conceived detrimental behavior - they will be welcomed and paid handsomely to boot.

I remember from my college days when I saw the absolute dispicable behavior of a young baseball player from Arizona State. He was such a jerk, such a cancer on the team, that his teammates actually voted him off the team. Members of the team brought their concerns and their consensus decision to the head coach. Rather than heed the players' feelings and actions, the coach, instead, elevated that player to Captain. 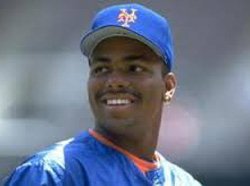 That player...was none other than Barry Bonds. And, of course, Mr. Bonds' behaviors continued well into his storied major league career. And because he was such a great player, his ornery demeanor, his poor behaviors, his disrespect for anybody and everybody...were just ignored. Because he hit home runs and put fannies in the seats. A wonderful example to follow.

So now I am sure that Mets fans...who are whining and complaining about the moves that the Mets have NOT made thus far in the off season...are looking at the latest move by the Yankees to acquire Aroldis Chapman from the Reds in exchange for four minor leaguers. And while it IS true that Chapman is an overpowering talent and COULD make any team better, he is just another case of some problem person being given every opportunity that a person with lesser or no talent would EVER be given.

While Mets fans clamor for the ownership to spend money on a big name bopper, they should remember that this very same ownership DID, in fact, spend big money on some big names who were even bigger head cases and trouble in the clubhouse. George Foster...remember him? The guy who one time led the Big Red Machine with 52 home runs? And after signing a big contract with the Mets, for SOME reason, he was dismissed in the middle of that great season of 1986. Remember Vince Coleman? Known as Vincent Van Go for the great Cardinals teams of the 80's? After signing a big contract with the Mets he all of a sudden lost his speed and created such havoc that the Mets had to send him packing. The great Bret Saberhagen. Sure he put up some nice numbers for the Mets...but he also became a most unwelcome figure due to his questionable hijinks. And who could possibly forget Bobby Bonilla? Another person rewarded who was one of the biggest all-time jerks to ever play for the Mets...TWICE! Isn't he STILL on the payroll?

The fact is that it doesn't matter how bad you are...as a person, that is...it only matters how GOOD you are on the playing field. The Yankees brass said they did due diligence before making the trade for Chapman. Apparently the fact that the Dodgers had already backed off was not a good enough sign. But then the Yankees have always been a haven for the poor guy who was led down the wrong path and could be fixed just by wearing pinstripes. It worked for Darryl Strawberry...it worked for Dwight Gooden...it just quite didn't work for Steve Howe, though.

I am glad the Mets have made it a point to stay away from the "problems" around the league. They have worked hard to put together a strong clubhouse with good personalities that creates a positive cohesiveness among the troops. True, Yoenis Cespedes is a great talent. But he can also be a malcontent and be a hot dog that is just annoying and counter-productive. His fellow Cuban Yasiel Puig is so disliked in the clubhouse, by his own Dodgers teammates, that he is impossible to trade because word has spread around the league. But rest assured that Cespedes WILL have a big pay day because SOMEBODY will want the advantage of his talents and overlook the negative impact he will have. Hey...he has already played for FOUR teams in FOUR years. And somebody will almost certainly take on Puig...because they will be desperate enough that they won't care how horrible the clubhouse atmosphere will be.

It makes me think about how it even transcends into the real world. Like the legal case involving the "Affluenza Defense" which is one's inability to understand the consequences of one's actions because of financial privilege. Seems to me that "privilege" has a lot to do with what you are able to get away with and what you are able to achieve.