Back...Back in the New York Groove?

Last week Jose Reyes made headlines saying that he would love to finish his career with the New York Mets. This coming while he was with his third team since leaving the Mets, having been traded for the face of the Colorado Rockies franchise, Troy Tulowitski, just a couple of weeks ago at the trade deadline. 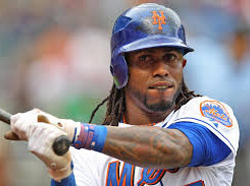 At first, it would seem like a bad decision on the part of the Mets...upsetting the (big) apple cart...destroying team chemistry...and bringing back a player who quite often displayed as much of a lack of discipline and professionalism as he displayed excitement and energy with total disregard for his own body.

However, after the Pirates series, it began to look like the best move the Mets could make would be...gulp...to finally part ways with Daniel Murphy and Ruben Tejada. Bring back Reyes, put him back at shortstop and the leadoff spot and let him hold down the fort until Amed Rosario is ready to take over the position.

Hand the second base job over to Wilmer Flores...hey...he is now a cult figure and he has proven he deserves the chance with his clutch hitting and he is certainly better than Murphy anywhere in the infield.

I have loved Murphy's hustle and hard-nosed play ever since he arrived on the scene. But he can't play the outfield and he does not hit well - certainly not enough power - to justify overlooking his play in the field. Murphy would be better served to play in the American League where fielding has always taken a back seat to hitting.

Reyes' best days might be behind him, but returning to the Mets would provide a resurgence for him and a source of speed and energy that is so needed in this Mets lineup.

People in this conversation