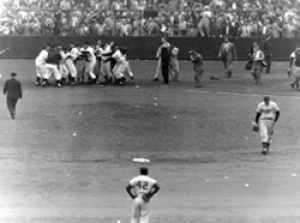 The New York Mets spent all but a few days of the 2022 season in first place. The spending of owner Steve Cohen, the dealings of general manager Billy Eppler, and the infusion of a new thought process and back to "old school" baseball by manager Buck Showalter proved the recipe for an emergence from the doldrums of what had come to be expected of the recent Mets.

The team has surpassed expectations. And, yet, the keyboard experts on social media are calling the team lifeless, choke artists, playing without heart, hyper-analyzing every move made, every instance of failure magnified. Rather than the post season excitement exhibited by Toronto Blue Jays fans, Seattle Mariners fans, San Diego Padres fans...Mets fans and media alike are ranting about the Mets as if they had just suffered a collapse of epic proportions.

You want to talk about collapse? Let's do that.

On August 11, the Brooklyn Dodgers were up by 13 games with a record of 70-35 seemingly well on their way to finally winning the pennant. They never relinquished first place…they did keep winning…although the New York Giants got hot and made up that 13-game deficit to end up in a flat foot tie – with identical records of 97-58 - at the end of the season. (Sound familiar?) That would lead to the two-out-of-three tie-breaker and one of the most famous home runs in baseball history, Bobby Thomson’s “shot heard ‘round the world,” giving the Giants a walk-off victory of the third game and the National League pennant.

On August 23, the Philadelphia Phillies were up by a high of 7 ½ games with a record of 76-47, and were actually up by 6 ½ games as late as September 23, with a record of 90-60. But with only 12 games left to play and a 6 ½ game lead, collapse doesn’t even explain how they lost the next 10 games. Even though they won the last two to finish the season, they fell all the way back to third place in what has always been viewed as an embarrassing finish and tarnished the reputation of Manager Gene Mauch.

The 1969 Mets forced a major collapse of the Chicago Cubs

The 1969 Chicago Cubs were in first place every day of the season from the very first day and into September. They were up by a large margin of nine games on August 16 with a record of 75-44. Until September 10, when the Mets finally overtook them and send them reeling. Every Mets fan knows about that season, when the Cubs went from 9 games in front to 8 games back by the end of the season.

Looking back at the pre-season predictions, most outlets had the Mets winning 85 games. One went so far as to make a bold prediction of 91 victories. But the “over-under” was pretty much 88 games. The Mets have outperformed that mark and it truly was not expected.

The team performed very consistently at the beginning of the season and was playing “old school” baseball. And they were doing it without Jacob deGrom in the rotation. But injuries began to hit the team. The absences of key players, the nagging injuries of those who remained in the lineup, and the obvious lack of depth did eventually take a toll.

The Mets were not bad. Inconsistent? Yes. Losing to some teams they really should have beat? Yes. But bad? No. The Mets went 58-35 the first half of the season. They have gone 40-26 in the second half. They had a winning month in every month of the season heading into October. The worst month? June when they went 13-12. Over the last two months (August and September) of the season the Mets went 34-22. They did that all at less than full strength.

The Braves…well…they were just a little bit better. They played without Ronald Acuna, but they had multiple young players who burst onto the scene and played exceptionally well – led by 21-year-old phenom Michael Harris. Starting on June 1, the Braves went on a 75-32 tear, culminating in the three-game sweep to overtake first place.

Sure, the 2022 Mets could be viewed as a disappointment, if you view it from the point of a first-place finish. It wasn’t expected. And if you don’t expect something, you are taught not to be disappointed, right? That’s what my therapist always tells me, anyway.

The reality is that the Mets were over-achieving, if just a bit. In the past, with the team getting hit with so many injuries to key players, history tells you that the Mets would have fallen back in the pack in the division race. But they didn’t…they kept pace and have one of the best records in team history with three games still to play.

To view the season as an epic collapse is unrealistic and not accurate. While home field advantage is always optimal, the key in today’s sports world is to simply get to the post season, be healthy, and, in baseball, set up your pitching rotation.

The 2022 Mets are back in post season play. That’s what every Mets fan wanted, isn’t it? So what’s everyone complaining about? Don’t answer that… 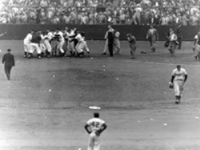