I'm beginning to get the feeling I'm watching a rerun. Yeah, yeah, yeah...Daniel Murphy hit another home run. And Jacob deGrom gutted out another victory. And Jeurys Familia was lights out again for another save. Maybe this is the reason that computers have "Control C" so that it makes things a bit easier. It seems like the Mets have a "Control C" of their own as they continue to get a great performance from one of their young starters and Familia has just been so dominant to finish things off. Murphy? Whatever he is eating, or drinking, I've got to get some of it. He is simply RED HOT, LOCKED IN and...if I were him...I would be hoping that this season would NEVER end.

With the 5-2 win in Game 3, the Mets have the Cubs on the brink and are but one game away from getting to the World Series. 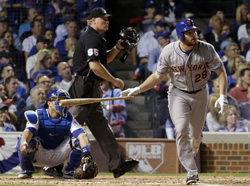 The question heading into the series was whether the Mets young, dominant starting pitching could handle and contain a young, powerful and potent Cubs lineup. Well, the verdict may not be in yet, but the jury is giving every sign what the verdict may be. So far Matt Harvey, Noah Syndergaard, and Jacob deGrom have all taken their turn having their way with the Cubs hitters. And Syndergaard and deGrom admittedly did not even have their best stuff. Now it will be Steven Matz's turn in Game 4.

You have to wonder what the Cubs must be thinking. Joe Madden has given all of the credit in the world to the Mets pitchers. And you can see that the Cubs hitters are heading back to the dugout shaking their heads.

It seems to me that the Cubs hitters came in overconfident. After all, they beat the Mets every game in the regular season. But the Mets are not only a different team offensively, they are also a much better team from a pitching perspective. All of the Mets starters had a hiccup or two during the season. And each of them learned how to make adjustments and pitch through adversity when they don't have their best stuff. Syndergaard and deGrom have proven what can be accomplished when you make those adjustments. So the Cubs hitters are facing a similar staff but with a much better arsenal...as if they even needed it.