Bring on the Cubs!

Daniel Murphy, who so often has caught the wrath of Mets fans for some of his...well...bonehead plays...almost singlehandedly got the Mets to the National League Championship Series. Murphy accounted for all three Mets runs against Zack Greinke including a go ahead home run...his third of the series and the difference in the game. But the play that was really the difference maker was stealing third base after advancing to second on a walk to Lucas Duda...taking advantage of a vacated third base because of the over-shift during the Duda at bat. That allowed Murphy to score the tying run when Travis d'Arnaud hit a fly ball to right field.

Jacob deGrom definitely took the mound without his "best" stuff...but he gutted it out and made the pitches when he needed to most. He yielded two early runs but then shut the Dodgers down even though he struggled in five of his six innings.

Noah Syndergaard made his first relief appearance and was lights out...just blowing the Dodgers away...even though he allowed a two-out walk in the seventh inning. It was a great move by Terry Collins and he could have used him for a second inning to pitch the eighth. But Collins chose to bring in Jeurys Familia to get a six-out save. The move worked, but it showed that there is NO confidence in any member of the bullpen other than Familia. It could prove to be a problem as the Mets advance to the next round as the Cubs have a power-packed and potent lineup that could shorten the game for the Mets starters. 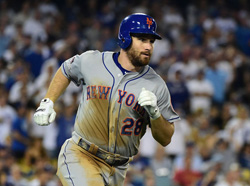 Once again, good pitching can always neutralize good hitting. But the Mets still have to score to win. David Wright, other than his one hit in Game 1, was non-existent. Travis d'Arnaud had a great Game 3, in fact, all of his hits came in that game. And he did hit the game-tying sac fly. But he has been a non-factor. And Lucas Duda...well...he set a record for most strikeouts in a Division Series.

If the Mets have any chance of making it to the Fall Classic, they will have to be able to match the Cubs and start to hit a little more. They struck out 57 times in the five-game series. Yes..I know...I know...they were up against Clayton Kershaw and Zack Greinke. And yes...I know...I know...that everyone thinks that they are the reincarnation of Drysdale and Koufax. But the fact is...they strikeout against EVERYONE.

One other observation...I know the Mets have given up on some people who have turned out to be stars elsewhere. They have a history of doing that. Can you say "Nolan Ryan?" But Justin Turner...batting clean-up for a Dodgers team that has some legitimate hitters on their roster...and going 10 for 19 with some clutch hits...and making some great plays at third base...did the Mets miss the boat on him? Or is he just like another Mets castoff, Marco Scutaro, who was nothing more than a utility player for the Mets but became a real servicable and productive player away from New York?

It seems like the Mets have destiny on their side. But then, I seem to remember that the Cubs were supposed to win the World Series in 2015. At least that's what Marty McFly was surprised to find out. So I guess we will find out which team was truly meant to be in the World Series. And we will also find out if the team built for and with pitching will outlast the team built for and with power.