It is just amazing how ridiculous some fans can be. The furor over signing Cespedes was relentless. Fans screamed that the Mets ownership NEVER spends money. And I think it is just incredible that the media feeds the frenzy and perpetuates the insanity.

Whether it was caving into the fan pressure or simply Sandy Alderson sticking to his plan and doing what was right for maintaining that plan and, at the same time, adding additional necessary parts, is irrelevant at this point. The fact is the Mets GM has taken chicken shit and turned it into chicken soup. Yes...he was not very successful with acquiring some bullpen help over the years of his tenure. But then, what GM really has been? Bullpen arms are so unpredictable. But what he HAS done is oversee the reshaping of the franchise, and has made the Mets into a contending team with a strong core of young talent promoted from a revitalized farm system, and bringing in spare parts when and where needed. Isn't that the formula the Yankees used to build their last dynasty? 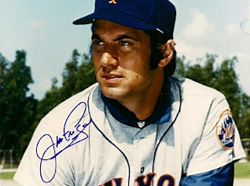 So now that the "Sign Cespedes" craze is over, all of those fair weather fans are already starting with the absolute stupidity of trading Matt Harvey...Jacob deGrom...Noah Syndergaard...Steven Matz...Zack Wheeler. I know that Wheeler was included as part of the aborted Carlos Gomez trade, but he was included because he WAS on the DL and still at least a year away from returning from Tommy John surgery. So the Mets went into "win now" mode and were somewhat willing to give up a non-working piece to secure a what they believed would be a working piece.

But to suggest that the Mets give up ANY of the five of Harvey, deGrom, Syndergaard, Matz, and Wheeler in a trade is just plain insane and ignorant. Well...I shouldn't say it like that because EVERYONE can be had...for the RIGHT price.

Does anyone remember a blockbuster trade the Mets made to bring an All-Star shortstop to New York? On December 10, 1971 the Mets thought they would bolster their offense by bringing in Jim Fregosi and moving him to third base. The trade included Francisco Estrada, Leroy Stanton, Don Rose, and Nolan Ryan. The Mets were desperate for some punch at third base and thought that Fregosi was the answer. Little did they realize that he was out-of-shape, near the end of his career, and would never produce the numbers that he did as a shortstop for the Angels, let alone the numbers expected of a productive third baseman.

The Angels, meanwhile, were adamant about including another pitcher...they wanted Gary Gentry. Gentry had shown more consistency than Ryan. But the Mets were willing to part with Ryan because they had grown frustrated with Ryan's inability to harness his power and was so wild that he had walked more batters than most pitchers today strike out. And...to make matters worse...he and his wife hated New York. They didn't like the pace of the city and could not deal with the added pressures of the New York tabloids that were so critical and cynical in an era that didn't even have social media to contend with. And so Gil Hodges and his trusted pitching coach Rube Walker gave their blessings to trade Ryan and be done with the eternal talk of "potential." Little did they know...

Fast forward to 2016...and none of the Fab Five are suffering the same circumstances as the young fireballing Nolan Ryan. Rather, the five have shown that they have harnessed their natural abilities, have learned how to pitch, learned how to make adjustments, and, almost as important, have actually enjoyed themselves and thrived in the New York City spotlight. The fact is, nobody will ever really know if Ryan would have become the great Hall of Famer that he is had he been forced to do it as a Met. But we shouldn't have to learn the same thing about any of the Fab Five.

This staff could turn out to be one of the most dominant staffs ever assembled and could prove to be the asset that allows the Mets to be annual contenders and leaders in the division...much like the Braves of the 1990's. The group should be kept together for as long as possible...and for as long as it is financially feasible.

Unless...unless..unless...some team comes in and bowls the Mets over with someone more substantial than the next Jim Fregosi. Honestly, unless the talks involve Mike Trout of the Angels, Bryce Harper of the Nationals, Giancarlo Stanton of the Marlins, Paul Goldschmidt of the Diamondbacks, I don't want to hear the names of Harvey, deGrom, Syndergaard, Matz, or Wheeler mentioned in any trade talks. Again...everyone can be had for the right price...but anything less than that is absurd. And suggesting that any of the five be traded off for a spare part here or there is just insane! So stop the insanity please...learn from history. If you want to make silly trades that don't make sense, stick to Fantasy League play, because this is the real world.