The Best Staff Ever...or Too Quick to Anoint? 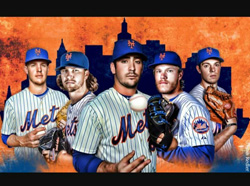 The current group of youngsters - Matt Harvey, Jacob deGrom, Noah Syndergaard, Steven Matz, and Zack Wheeler (when he returns) - is truly dynamic. They are power pitchers with uncanny control in and out of the strike zone. And they have already been battle-tested under the biggest microscope, pitching in New York while vying for a World Championship.

But are they being labeled as the “best” too quickly? What IS truly the best staff ever assembled?

Baseball questions are generally all a matter of perspective, depending on the generation of fan, or the era of the game.

When I think of the most dominating pitching staff, I immediately think of the Dodgers of the early to mid-1960’s.  The one-two punch of Sandy Koufax and Don Drysdale is often referred to as the best of all time by those who faced them. Although, they didn’t have a poem written about them like another one-two punch, Warren Spahn and Johnny Sain. The battle cry of the Boston Braves of the 1940’s was “Spahn and Sain and Pray for Rain.” Those duos were so dominant that they would regularly start 40+ games, pitch well over 300 innings, and throw at least 20 complete games each year.

Can you imagine ANY pitcher today starting 40 games, throwing 300 innings, and completing 20 games?

OK, so there were a couple of dynamic duos, what about an entire staff? During the 1970’s there were a few staffs that proved to be dominant, one THROUGH four.

The one staff that really stands out is the one that the Baltimore Orioles marched out there every fourth day in the early 1970’s. In fact, in 1971, Mike Cuellar, Dave McNally, Jim Palmer, and Pat Dobson all won 20 games…the only time in history that any team has had four 20-game winners.

Then the 1978 version of the A’s had a young quintet of Mike Norris, Matt Keough, Rick Langford, Steve McCatty, and Brian Kingman. The problem with this group was that they got quickly burned out by overuse, courtesy of Billy Martin.

But if you look at all of these dominating staffs, the truth is there wasn’t much longevity to them. They were burned out fairly quickly. While it sounds absurd, it really was the norm to start 40 games a year, throw 300 innings, and throw a complete game every now and then. Today, that’s unheard of.

There is one example where longevity and success were unified, which is what made this team so special. The Atlanta Braves of the 1990’s won year after year thanks to a starting staff led by Greg Maddux, Tom Glavine, and John Smoltz. The two forgotten members of that staff were Steve Avery and Pete Smith. And they were forgotten because Maddux, Glavine, and Smoltz were all so good that they were the first triumvirate to be enshrined in the Hall of Fame.

So when looking at a staff as a whole, obviously the best that has ever been assembled has to be that Braves staff. After all, can any other staff claim three Hall of Famers?

I know that the Mets had great pitching in the late 1960’s, early 1970’s, led by Tom Seaver. Seaver was one of the best pitchers of all-time. Jerry Koosman was truly a much better pitcher than anyone ever gave him credit for. And the two made for a pretty damn good one-two punch. But they never matched the dominance of Koufax and Drysdale. And the two Dodger Hall of Famers had less hitting support than the tandem of Seaver and Koosman.

The Mets again had some pretty damn good pitching in the mid to late 1980’s. In fact, the staff of Dwight Gooden, Ron Darling, Sid Fernandez, Bobby Ojeda, and Rick Aguilera was probably better as a group than any prior Mets staff. But longevity was not a characteristic of that group either. Gooden’s off-the-field antics undermined that staff as injuries hit Darling, Fernandez, and Ojeda, and Aguilera was packaged to bring Frank Viola to New York. That group had the talent to do what that Braves staff was actually able to accomplish. Maybe the pressure of playing in New York and all of those outside influences submarined that group. It’s obviously a much different atmosphere in Atlanta.

The current Mets young guns have already shown they can withstand the pressures of playing under such scrutiny…on the biggest stage. They have shown they are a tight-knit group who challenge each other. Each are capable of being the ace of the staff. It certainly looks like this is a staff that could very well have five No. 1’s in their starting rotation.

It would be fun to see each of them put together a season to match what the 1971 Orioles did when they each won 20 games. OK, situations in today’s game don’t truly allow for four teammates to win 20 games, let alone five starters. But it IS conceivable that the Mets five could each win 15 games each in a single season.

But we have been down this road before. Hopefully this group follows a path that looks more like that of Maddux, Glavine, and Smoltz rather than Isringhausen, Pulsipher, and Wilson.